Start typing and press
Enter to search
Skip to content

Yesterday, I skipped the gym in an attempt to get home early and rest. On the way, I got notification that hay was being delivered at our farm over the hill and I could meet them there.

I stopped at home first and got a bucket of feed, then began to make my way over, trying to just enjoy the slow pace and eliminate the stress I was already feeling.

I got another text asking me to turn around and go to the end of the road. It seemed some hay had fallen off the trailer and help was needed. I pulled into a driveway and re-routed yet again to pick up what I assumed was an extra bale or two I could stack in the trunk. 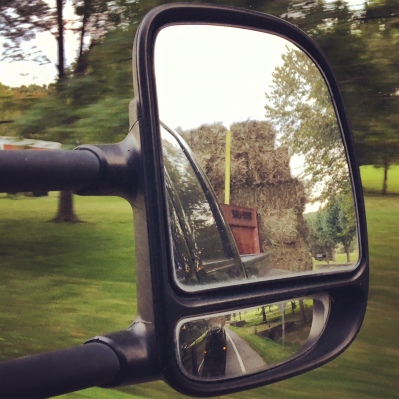 But when I got to the end of the road, I saw three trucks, two piled high with bales, and one with a near-empty trailer in which everyone was loading a couple dozen bales from the ground. This third truck just happened to be passing by and stopped to take time out of his evening to lend a helping hand. Just like a good old fashioned country song.

I jumped right in and did my best to help, but those bales were at least 70 pounds a piece. I was in a new shirt, sleeveless, which wasn’t the best decision on my part. I struggled to lift the bales onto the trailer, banging my legs into the hard metal and leaving deep bruises that have been making their way to the surface ever since. I bruise easier than a peach.

Once everything was reloaded and re-strapped, we entered into a caravan going about 15 miles per hour. On this drive, I realized my forearms were burning and itching in intense pain. I looked down to see them covered in tiny, irritated bumps and scratches. But I couldn’t stop to care. We had to keep going. There was work to be done.

After a while, we finally made it to our destination. We unloaded the neighbor’s trailer and left the rest for daylight as it was nearly dark already. We fed and watered the horses and made the trek home, where we then had to corral a couple mares and foals from the pasture into the barn.

So much for no workout. I guess that’s country living…