Start typing and press
Enter to search
Skip to content

About a week ago, I began the intensive daily practice of driving slowly out of our driveway and maintaining a low RPM to allow a gradual increase in speed up until a certain hill on our road. It sounds like a weird thing to worry about, right?

I’m doing this because I was recently enlightened to the fact that my needs for speed and hurry as soon as I left home for work were actually hurting my car – causing the transmission to shift weird throughout the entire day. And the amazing thing was this: as soon as I started my day in this new paced manner – the problem disappeared. Not to mention, the sheer practice of being mindful about the RPM and keeping an eye on that little ticker, making sure it didn’t reach a certain point, has been found to be rather soothing.

We live off of an extension of Arno Road that stretches from Franklin to College Grove. This road, I’m to believe, was once home to sparse, scattered houses – primarily rooted in agricultural and livestock pursuits. Since I’ve known it, however, it’s been crazy and bustling with golf course neighborhoods, million-dollar houses and, well, the occasional farm or double-wide trailer. The majority of the traffic is run by fast, expensive cars led by impatient drivers…and most of them will tail the shit out of you if you dare go any slower.

I don’t know about y’all, but one of the greatest stresses for me is the act of being tailgated. Not only is it unsafe, but it’s just plain rude. If you go faster, they will too. And when it’s some tricked-out truck with blinding LED lights at 11 PM or some crazed soccer mom in her brand new Range Rover, it’s frankly aggravating. I can feel my blood pressure rise as I debate going slower to make them mad or faster to run the risk of getting pulled over (because that would be my luck). If I’m lucky, they just pass me. But oftentimes, they don’t even bother – almost like they enjoy intimidating the crap out of other people. Or they don’t even realize what they’re doing.

All that to say, the idea of coming out of my driveway at 25 mph is a little threatening. Yet I feel a certain calm now when I do it. I look at the oncoming traffic as far as I can see and try to pick the most opportune moment, and for whatever reason I’ve been lucky enough to avoid the majority of the morning onslaught. Once someone catches up with me, I already feel more stable and more confident in just letting them tear themselves out of shape about my still over-the-speed-limit driving while I’m having a grand ole time cruising along listening to NPR.

Yesterday, I spent that slow drive tuned into a podcast on meditation. As y’all know I’ve mentioned, I’m trying to get into the act. When I first started, it only took three minutes of my morning to feel like I was improving my morning routine, even if it was just a placebo affect. But of course, young habits are hard to form and tired/busy mornings left me saying, “I’ll do it tomorrow! I promise!” And then I’d break that promise. The cats, also once on board with the soothing voice of my guided meditation app, had taken to playing all around me whilst I tried to clear my head and frankly, even though I felt some guilt, I was pretty sure the meditations weren’t doing much to improve my overall state of being. So I kept allowing it to slide.

But then last week, I found myself struggling! I was sleepy and stressed out about having to go to work, hit the grocery, get to the gym, get all my 10,000 Fitbit steps in the rainy weather, figure out dinner, bake a belated Easter dessert, run other errands, get my taxes done – you name it. We’ve all been there. And as I slowly whittled away at these tasks (with some glorious help from my Prize Man Friend), it dawned on me that I hadn’t meditated in over a week… and that maybe these things were connected.

I had been making meditation a chore and making myself feel bad about it being yet another thing not getting done. Not something that was enjoyable or centering, which was what it was intended to be.

If there was one thing I could control, it was to start taking things one step at a time and allow myself at least 3 minutes of quiet in the morning. So on Wednesday, I opened up my bullet journal and wrote for every weekday at 8:00 AM: Meditation.

Sure, it was easier to do knowing that some of the other stuff was finally off my plate. But at the same time, it made me feel refreshed to take that time once again. The specific exercise I partook in on Thursday involved being aware of all the sounds and sensations surrounding me – just being mindful of them. And I realized how grateful I was to know the sun was shining, the goats were ‘bup’ping, the train was rolling and the birds were singing. Here I was, sitting in the middle of my own slice of country, fully at peace. And then, even though I was running just a little bit late, I took that slow drive out the driveway and threw on the aforementioned podcast. Everything had aligned.

Now back to the actual content of what I was listening to that actually inspired this post! In the podcast, Dr. Leah Weiss explained her theories on meditation and mindfulness. Because for her, it’s actually not about closing your eyes and completely clearing your mind. It’s not about mantras. And it’s certainly not about blindly following a trend. It’s simply about taking one thing at a time, mindfully. “Putting intention behind your attention” in all aspects of life. Meditation is just training.

This was exactly what I needed to hear and what I’ve probably been told many times, but struggled with in a fast-paced world filled with increasing responsibilities and impending deadlines. I mean, how hard is it for any of us to accomplish something when we’re focusing on a million other things at the same time? According to Leah, it’s OKAY for our minds to wander when we meditate, but the key is reeling it back in to the moment. Your mind can drift a million times, but so long as you re-center, then you’ve done good.

So basically, we can have a thousand tasks to do and we can have a dozen cars on our tails, but so long as we actually do something – then that’s progress.

Jenna, the host of this GoalDigger podcast (and one of my new favorite people) said she struggled with meditation because she never felt like she accomplished anything through it. Which is quite like how I was feeling a couple weeks in. What we both needed to realize is that the most gratifying part of this practice is making it a practice – making it a constant in a whirlwind life. And granted, while I didn’t automatically feel the benefits of meditation when I began, I certainly noticed when it was gone. It’s not worth beating ourselves up over – feeling like we’ve failed or succeeded. It’s just about trying. 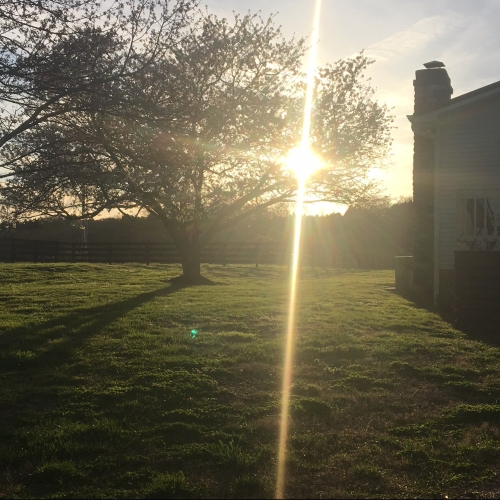 I’m realizing now that even the podcasts I’m listening to on my lunchtime walks or gym visits are a meditation on my future. Whether I’m hearing the story of a female entrepreneur on Girlboss Radio, learning about diets or cleaning or mindset through By The Book, taking life advice from Style Your Mind, or keeping up with social media and wellness trends on Glowing Up or The Skinny Confidential – I’m meditating on ways to make my life more balanced and successful in my own point of view. I’m taking some (semi) silent time to just listen and think. And by the way, I highly recommend all of the above. Click the links to check all those fierce females out!

As far as meditation guidance, my primary sources have been the Calm and Aura apps. Both feature free and in-app purchases, and of course I’m getting by just fine with the free help. Aura even checks in with you whenever you open the app to see how you’re feeling (i.e. Great, Okay, Stressed, Anxious, Sad or Can’t Sleep). Then it tailors your 3-minute selections to what you might need to hear. It also checks in with you throughout the day to offer stories and new listens – hard to do when you’re at work, but it’s a nice gesture!

Overall, I’m really striving to make positive life-changes for my psyche and my future, whether it’s driving slower in the morning, taking those 45 minute walks at lunch, or spending a little extra quiet time in the morning for some deep breaths. It doesn’t always do the trick, and mindfulness isn’t easy, but once you’re aware of it – it’s not so terrible to stop and pause every once in a while. Is it?